It’s been far too long since I wrote a blog post. Every time I decided I should start one over the last few months, I found an excuse not to. I can’t really explain my recent relative silence. Yes, the flurry of promotion for The Paris Affair sapped me a bit. And with everything that happened in the election and its aftermath, I felt beat up emotionally. Of course, there’s also Covid. I and all my family have remained, thankfully, healthy, but there has been so much loss among those I know.

I make a point of telling people that the reason I’ve gone quiet is that I’ve been very busy coaching writers and finishing up a revision, as well as finishing the nonfiction book coaching course with Author Accelerator. Which I have, and earned certification in nonfiction to add to my certification in fiction. Even then I didn’t shout about it all that much on social media, which I would have six months ago.

So what’s been going on? 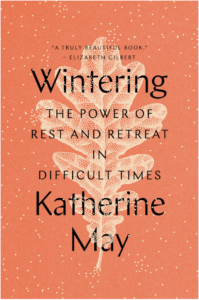 I was listening to the podcast Moms Don’t Have Time to Read Books the other day, and Zibby Owens’s guest was Katherine May, author of the beautiful memoir, Wintering. I don’t read a lot of memoir, not because I don’t want to, but because I have so much historical and other fiction to read. My own podcast guests have books coming out all the time, and it’s a dash to keep up with reading them so we can have really fun conversations. But something about this particular memoir reached out to me.

In Wintering, May talks about our need for periods where we retire from the world. Just as nature has a way of burrowing down and resting for months of the year, people do too. Usually we resist it and keep pushing ourselves to “be productive.” Often the demands of life make it difficult, if not impossible. But May illustrates through her beautiful, soulful prose that those periods of what she calls wintering are where growth and renewal happen. And unlike the natural world, our periods of wintering don’t necessarily coincide with the seasons. They can come whenever difficult times force us to step back.

So, I bought the book and have been reading it, drawn to it because of my sense that what has been happening to me since the beginning of December is my own period of wintering. May describes how for her, regular wintering can start with preserving foods: jams, pickles, etc. Nesting, in a sense. I’ve been doing that too. Not preserving, though. I’ve been refining my workspace, sorting through clothes, filing, and reorganizing cupboards. Undertaking such tasks is my way of accepting that the wintering season is coming. It’s bringing more darkness, more sleep, turning my focus inward.

Many things in my life have combined to push me into a wintering phase. The season, the isolation, big projects that needed my full attention. But a peculiar thing happened as I started to withdraw. My interest in music bubbled up to the surface from where it had been buried for years. To my mind, I had left the practice of music to take up the practice of writing. But somehow the two remained stubbornly intertwined. Theresa, the heroine of The Paris Affair and two other of my YA historical mysteries, is a young violinist. I first wrote her into being in 2008. Something has drawn me back to her, and I published two more of her adventures in recent years and am working on a fourth. Because of her passion for playing the violin, writing her forces me to conjure up the physical and emotional sensations of making music.

I always tell people I used to be a pianist. But that’s not true. On some level, I never stopped being one. I just stopped practicing. It’s been there all along, below the surface, just out of sight.

Researching and writing The Paris Affair may have cracked me open to music just a little. In any case, it gave birth to an idea for a YA nonfiction book about women composers. That meant doing even more music-focused research, and learning anew that many of the women composers in the eighteenth and nineteenth centuries started out as pianists. As performers, they needed original music to dazzle audiences. Several continued to compose and took on other genres, even big symphonic and choral works. Much of that music stands up in comparison to the great composers everyone thinks of, and who are all men. Of course, those men—Beethoven, Brahms, Chopin, etc.—composed the music available to me to play, and that consoled me through my teenage years and young adulthood.

The outcome of all this was that I started listening to music again. I had chosen silence by default for years, shutting myself off from my musical memories. I think bumping up against all those women leading musical lives jolted me out of my self-imposed musical exile. One evening, I took a CD from my vast collection and put it on when I started getting ready for bed. I left it on while I read, and let it play me to sleep. And now, that’s a practice. I listen at the end of the day to  anything from madrigals to Mozart to Prokofiev. I’ve started dreaming about playing the piano. I can feel it in my hands, the shape of the lines, the heft of the chords.

In writing workshops, we sometimes talk about developing your writing muscle, having a practice. To play a musical instrument well, the muscles you develop actually exist in your body. In some senses, skilled musicians are elite athletes. I forget where I read it years ago, but playing an hour-long piano recital requires the same physical effort as shoveling a ton of coal. Why this is important is that there is no way, after a break of so many years, that I could sit down at the piano and just play. Not the way I would want to play, at least. I would need to spend time, regular time, doing the exercises to build up those muscles and that dexterity again. Because I wouldn’t want to settle for the easy stuff. I’d want to play the music I love, the music that requires that technique.

When I was working at a full-time day job and carving out as much time as I could to write novels, I didn’t have the luxury of time to devote to practicing the piano. But my life has changed. I work for myself. I can make my own hours and prioritize whatever I want.

So, one day, I went over to my long-dormant Baldwin Pianovelle—an electronic instrument with 88 weighted keys and touch sensitivity, and switched it on.

Nothing. It didn’t work. The light came on, but no sound. Frustration. I started researching what might be wrong with it, and discovered to my dismay that the Italian company that made the Pianovelle for Baldwin no longer makes them. No repairs available. After a question to a tech expert about it, I found out that a little tiny battery had corroded and messed up an important circuit board. I got a new battery, and my partner Charles tried for two weeks to fix the instrument.

So, I had what was essentially a 150-pound paperweight occupying space in my study. I could have given up at that point. But I decided I should at least remove the thing—bad Feng Shui having a broken instrument in the house. I called the junk removers, who—with some difficulty—got it out of my second-floor room. It cost me. I rearranged things to work better with that bit of opened-up space. I felt freer. But…

The truth was, I ached to play the piano again. Within a week, I decided damn the expense, and ordered a Yamaha CLP-735 Clavinova. It will arrive less than a week from now. A piano that works will again be part of my life. The possibility of making music will sit right across the room from me.

But that’s just a beginning, a promise. One of the wisest people I follow, Dan Blank, told a group of us book coaches in a seminar about something he’d done to set an intention. He’d purchased a guitar that was well beyond his current ability to play. It was a promise to himself to be worth that guitar, to put in the work to deserve it. That’s how I feel about this new piano. To deserve it, I’ll have to work. I’ll have to practice every day. Not for the three hours I used to put in, but enough to start developing those muscles again. I have to make time for it on the understanding that it will enrich everything I do.

My period of wintering may be coming to a close. The world is slowly waking up. The days are longer. Vaccines are happening. We have a sane man in the White House again. The ground hog might have predicted a lingering winter, but I can see its end. Through my personal period of wintering, I rediscovered some things that were important to me, made some decisions I hadn’t given myself time to consider before.

I gave myself permission not to push on and pretend everything was fine, and my period of wintering gave me back music.