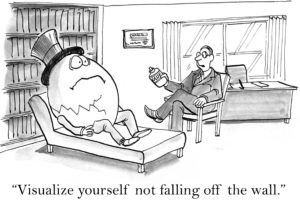 Many books and blog posts have been written about “show don’t tell.” I’m not going to pontificate about it here. As most writers understand, there’s a place for both in a novel.

What I want to talk about here is what that phrase actually means. I want to illustrate what it entails for those places where we definitely want to show. These include action scenes, turning-point scenes, revelation scenes and so forth.

Before I get started, I must first acknowledge that this idea came from a lesson in the Author Accelerator Advanced Writing Coach Certification Program. I’m delighted to be deepening my understanding of coaching writers in this fabulous course, led by the warm, inspiring Jennie Nash of Author Accelerator.

Jennie used a nursery rhyme to demonstrate the difference between showing and telling. I’m just going to run with it here.

Play along with me: Here are two scenes where I show what the first few lines of a nursery rhyme tell. I don’t mean I go into great detail describing the setting etc. Instead I—well, you’ll see.

The boy’s heart started to pound. He could hear the voices behind him. He thought he might have fooled them by taking the turn that led across a field instead of continuing along the road. But they were faster, all of them. He cursed his chubby legs, the weight of his stomach that bounced as he ran, pumping his arms. His breathing came fast and hard. The world swam in front of his eyes. The village houses appeared alive, like so many eyes glaring at him as he sped by. They’re all laughing. See the fat boy run!

Then he saw it up ahead. The wall that ringed the village, keeping out wild animals and thieves. Boys dared each other to climb it. He never had before. But he had nowhere else to go.

The voices grew louder. He paused at the foot of the wall, bent over, his hands on his knees, trying to take deep breaths and stay calm. Then, focusing with all his attention, he looked for the bricks that jutted out, that would provide footholds and handholds. He started his climb.

By the time the crowd of children arrived, he had almost reached the top of the wall. Just one more effort, he thought, knowing that hoisting himself up to security was the most dangerous part of all.

He wanted to scream out, My name is Humphrey! But he knew that would be a waste of breath. He didn’t look behind him, but he could sense that the biggest, meanest boy had started scrambling up after him.

It was all so unfair. His whole life. He was the smartest boy in the class, yet even the teacher didn’t really like him. A knife of pain stabbed his heart. Would it ever change?

Humphrey couldn’t guess what would happen if the boy reached him up there on the wall. The distance to the ground in front of him was greater than the distance he had already climbed. There were no handholds, and rocks tumbled below to make it hard to get over the wall from outside.

I could end it all myself, Humphrey thought. He closed his eyes, imagining a world where no one jeered at him or teased him or chased him. Where was that world? Not in his village. It never would be.

“You’re not serious. She didn’t really ask for that. How could she?” Evelyn stared at the note scrawled on a torn scrap of paper that the page had just handed to her. She was used to coming up with inventive dishes for her demanding mistress, but this? Perhaps she had been too obliging, too able to produce the near impossible for the society queen’s legendary dinner parties.

“Don’t shoot me, I’m just the messenger,” the page said, grabbing a ginger cookie on his way out of the kitchen.

Well, she thought. I’ll do this for her. But she’ll be sorry.

Evelyn got to work crafting what would be her final masterpiece for the dinner party that night. She scooped handfuls of soft, white flower out of the canister and rubbed chunks of butter into it, her expert hands knowing without measuring exactly how to feel when the pastry dough came together. No mixer for her. That made the pastry too hard.

When she knew it was perfect, she paused, her hand resting on the lumpy round of dough, feeling its cool potential. Into the fridge it went.

An hour later, she rolled the dough out on the flour-covered board. It stretched and shuddered back like a living thing. Her touch was delicate but insistent, until it was the right size to cover a pie. The trick would be to bake it on its own without making it collapse. But she’d done that before. She put whole potatoes in the pie dish and then laid the crust over them, fluting the edge, making little bird shapes with the extra dough, piercing it to let the steam out. Then into the hot oven.

Evelyn wondered what her mother would think. She’d taught her everything she knew, taught her to respect the ingredients and worship the process. It was holy, this kitchen. Her skill was a blessing that should not be wasted. She closed her eyes and murmured, “For what I am about to do, may the Lord forgive me.”

A few hours later, the page returned, a small sack dangling from his hand. Frantic chirping and movement emanated from the bag. “Here you go,” he said, thrusting it toward Evelyn, clearly eager to be shot of his cargo.

She’d prepared the plate—an extra-deep pie plate—by putting birdseed in the bottom. She hoped it would occupy the little creatures long enough for her boss to get the surprise of her life.

It took some doing to secure the crust with the little things squirming underneath it. She’d gotten the serving maid in on it, and she knew how to carry it in with her thumbs holding the pastry lightly down so it wouldn’t fly off.

Evelyn watched the girl in her black dress with its frilly white apron, her white cotton gloves gripping the edges of the pie plate, and smiled. She wished she could stay and witness the chaos when her mistress stuck her knife into the crust and released twenty-four little black birds into the room.

But she had other plans. Evelyn untied her apron, reapplied her lipstick while looking into the polished bottom of a stainless-steel pan, then left, never to return.

I was going to write three of these but, well, I sort of got carried away, and I think what’s here is sufficient to make the point. Why did Humpty Dumpty sit on the wall? How did it feel to make an impossible pie? That’s the point of showing, really. It’s not to paint a picture, but to draw readers into the character’s world, to get them inside what’s going on so they care—and keep turning the pages.

With apologies to Mother Goose…