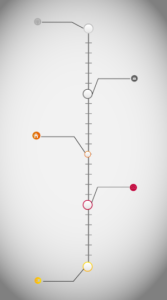 I’ve often thought about writing out random scenes, things that I see my characters doing, or events I know my characters will interact with at some point in the story. It’s pretty easy, in fact, to make a list of those scenes, and soon it becomes obvious which ones will make it into the story and which won’t. Some will be separate chapters, others will be folded into another, or perhaps comprise a memory within a scene that takes place later.

But that’s as far as the process of thinking spatially goes for me, and I think I understand why.

As I’m beginning the process of writing my new project, I realize that I have to know not only who my protagonist is at the beginning, but how she grows and progresses. I’m not certain—even if I know a scene must occur at some point—how my character will behave in it, unless I’ve witnessed who she is at the time the scene occurs. Throughout the story, her voice develops, her ideas evolve, her relationships blossom and fade away. Even when the action is only over the space of a year, or a few months, the whole point of a story is that a character undergoes a significant change by the end—mentally, emotionally, psychically. She is shaped by what she has been through.

My current WIP spans twenty years, from 1901 to 1921. Not only my main character and those around her change, but all of society undergoes a seismic shift, both forward and back. How can I write the ending scene until I’ve been through it all with my character, reacting, reaching, facing heartache and tragedy and triumph?

I can’t. That’s all there is to it. And so, tedious as it sounds, when I actually sit down to write, I start at the beginning and go step-by-step through to the end.